The United States Daughters of 1812 is a patriotic society founded in Cleveland, Ohio, in 1892, whose object is to perpetuate the memory of the founders of America, with their records of service in the French War, the Revolution, and the War of 1812. It was incorporated as a national organization February 25, 1901. It's membership is composed of women who are lineal descendants from an ancestry who assisted in the War of 1812, either as a military or naval officer, a soldier, or a sailor, or in any way gave aid to the cause.
The state organization contributed to the placing of a memorial window in St. Michael's Church, Dartmore, England. The state through the Alabama Charter Chapter marked the beginning of the Jackson Trail in Alabama with a boulder at Huntsville and also placed another boulder at Horseshoe Bend Battle Field marking the end of the said trail. This celebration took place July 4, 1914. This chapter was also the instigator of the movement agitating the building of the Memorial Highway to Andrew Jackson. It also presented portraits of Andrew Jackson to the high schools and maintains a cot at the Children's Hospital in Birmingham.

On May 17, 1917, the Alabama organization placed a boulder at Tensaw, marking the location of the famous massacre at Fort Mims. 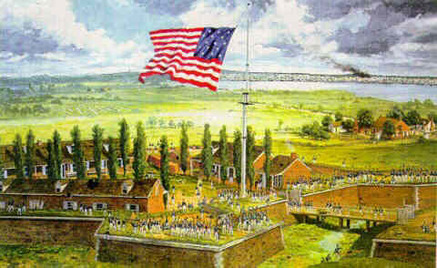 WORK OF THE SOCIETY

For more than a century, the members of the National Society United States Daughters of 1812, have dedicated themselves to patriotism, preservation of documents and relics, and education. These goals are as relevant in today's society as they were when the organization was founded in 1892.

Work of the Society includes promotion and education of the The Flag House and Star-Spangled Banner Museum (located in Baltimore Maryland), Old Fort Niagara, and Fort McHenry (birth place of our National Anthem); providing reading materials to the American Merchant Marine Library Association (AMMLA) which was created to meet the demands of the men in our Merchant Marine for reading matter by providing an exchange Library Service to American ships; preservation and education of St. Michael and All Angel's Church in England.  (This church was built by the French prisoners held by the English at Dartmoor Prison and was finished by American War of 1812 prisoners. The first American prisoners arrived on April 2, 1813, and eventually totaled 6,553, of which 271 known died.)

In addition, the Society also helps to support schools for under privileged children; support of America's Veterans; preservation of history; JROTC and ROTC awards, American Flag education, and the Society's own Spirit of 1812 Award which is awarded to citizens who have demonstraighted outstanding achievements in educating and documenting the history of the War of 1812.  These are just some of the works of the National Society United States Daughters of 1812.
National Society United States Daughters of 1812, was organized on January 8, 1892, on the 77th anniversary of the Battle of New Orleans. Mrs. Flora Adams Darling was the founder and first president.

﻿This is an official website for the National Society of the United States Daughters of 1812.
​
“Hyperlinks to non-U.S.D. of 1812 sites are not the responsibility of the N.S.U.S.D. 1812, the state societies, or individual 1812 chapters. The content contained herein does not necessarily represent the position of the N.S.U.S.D. of 1812.
​The President National is the official spokesperson of the National Society.”