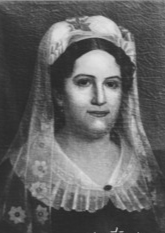 Meetings
Fourth Wednesday at 11:00 AM
In October, January, and April and on June 15th 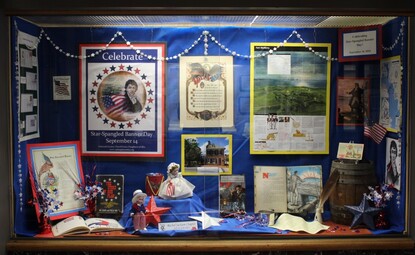 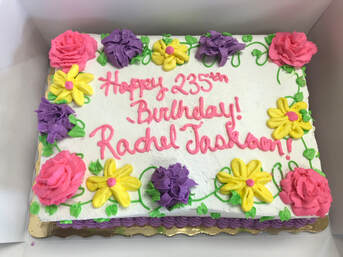 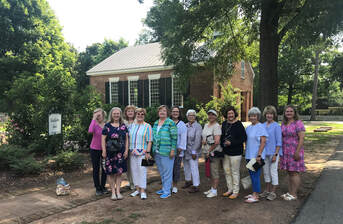 Memorial Day Commemoration at the Huntsville Madison County Veterans Memorial.  Service to Veterans Chair, Cindy Wallace, Corresponding Secretary Karol Kapustka, and State President Martha Ann Whitt proudly representing Rachel Jackson Chapter on this day. Cindy and Karol placed the Rachel Jackson Chapter wreath in honor of the men and women who died while serving in the United States Armed Forces, and members of numerous other organizations participated in the observance as well.

During the month of April, patrons of the Huntsville Madison County Public Library
​enjoyed a display case on the Historic Natchez Trace and the Natchez Trace Parkway 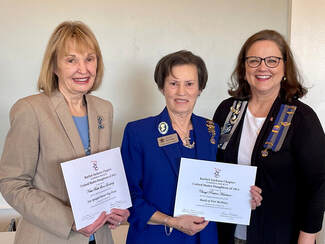 ​Rachel Jackson Chapter meeting was a fireworks extravaganza of red, white, and blue history! Fort McHenry Committee Chair Cheryl Harrison began the program with a background of the fort; this was followed by the National Parks Service video of the Battle of Fort McHenry. The poignant story of the battle, so crucial to the future of the United States of America, was appreciated by all in attendance, and the video concluded with a patriotic verse of the National Anthem.
Following the Fort McHenry portion of the program, Star-Spangled Banner Flag House Committee Chair Nettie Beth Lovelady provided the historical background of the "flag so large that the British will have no difficulty seeing it from a distance". Bringing the key figures of this time to life, the chair gave histories of Francis Scott Key, Major George Armistead, and flag seamstress Mary Pickersgill; she also displayed pictures of the Star-Spangled Banner Flag House located in Baltimore, Maryland.
The two committee chairs were presented with appreciation certificates, and donations will be made to each of their committees in their honor.

Eight Rachel Jackson Daughters gathered on December 1, 2021, to decorate a Christmas Tree at the Huntsville Madison County Public Library. The tree focused on the four schools supported by the National Society, and library patrons could read about each school as they viewed the tree and its decorations. Decorating the tree on this December Wednesday were: Karol Kapustka, Linda Maples, Kitty LaBay, Betty Weir, Rebecca Riddick, Terri Dean, Cynthia Sackett, and Sarah Curtis.

Preservation of the Church of St. Michael and All Angels
​Constance Haynsworth Grund, Chairman National​

​Constance Haynsworth Grund, Preservation of the Church of St. Michael and All Angels Chairman National, presented her program on the significance of this English church to the United States Daughters of 1812. Her program included photographs from her visits to Princetown, England, and interesting stories of her time at the church and cemetery. 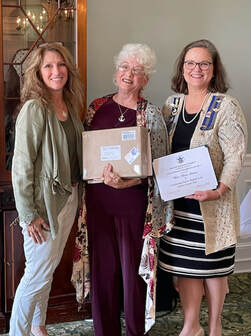 ​Tricia Montgomery, Marie-Mrock Johnston, and Rebecca Riddick - October 27, 2021
​The October 2021 meeting of the Rachel Jackson Chapter focused on the Natchez Trace Committee. Chapter member Marie-Mrock Johnston presented a program highlighting interesting stops along the Trace from Natchez, Mississippi, to Nashville, Tennessee. After the program, Marie's daughter, Tricia Montgomery, presented Marie with an American Flag which had been flown over the United States Capitol.

April 2021 ~ Meeting of the Rachel Jackcon Chapter, John Rankin received the N.S.U.S.D.1812 History Award for his extensive work in Madison County and throughout North Alabama. Nettie Beth Lovelady introduced the recipient who spoke briefly to the Chapter on some of his most recent work. 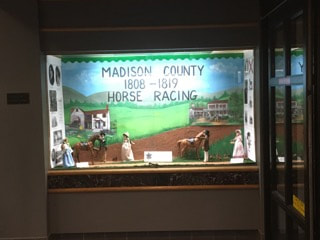 During the month of November, visitors at the Huntsville-Madison County Library were treated to a large display just inside the main entrance.  Davie Williams, Rachel Jackson Chapter Chair for Alabama Bicentennial presented her idea, and along with her committee, researched and created a detailed educational display for library patrons.  The display is titled “Madison County, 1808 - 1819, Horse Racing.”  Many of the residents and visitors had no idea of the history of horse racing in Madison County. 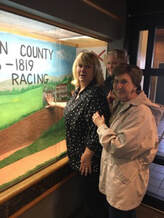 L to R:  Kelly Jernigan and Twyla Brammell and in
​back Davie Williams, Chapter Chair of Alabama Bicentennial. 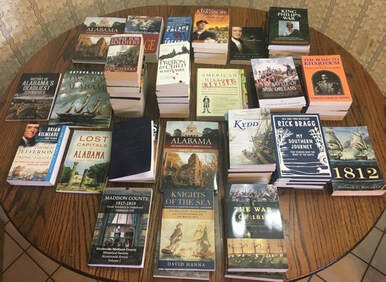 ​Pictured are books from Rachel Jackson Chapter U.S.D. 1812 Daughters.  The books will be sent to the American Merchant Marine Library Association which uses the books in “Seagoing Libraries.”  Rachel Jackson was one of the four Alabama Chapters who brought books to the 109th Annual Alabama State Council in Huntsville, Alabama, on March 23, 2019. AMMLA Chapter Chairman is Barbara Pratt . 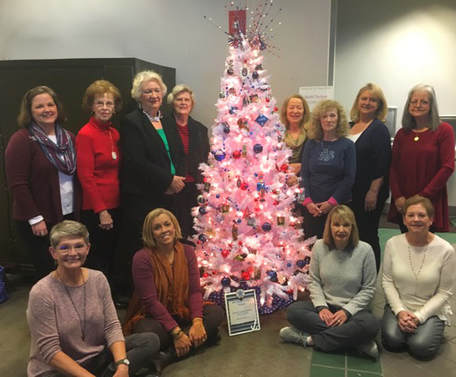 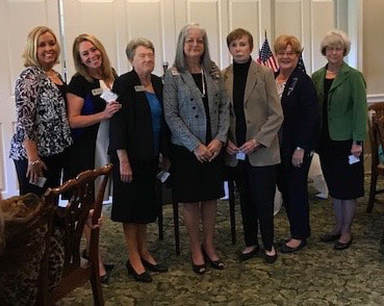 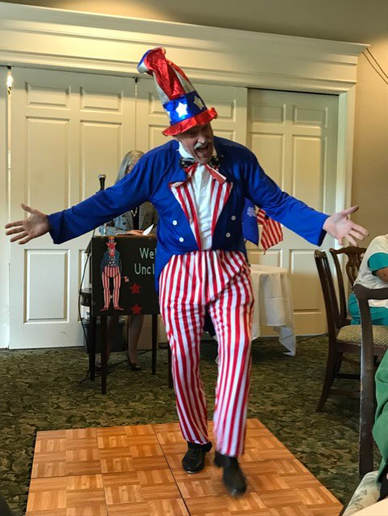 “Uncle Sam” (Mike Dunlap) presented a program to Rachel Jackson Chapter on October 24, 2018.  He sang and danced while using a series of popular patriotic songs as he told the story of the major wars in the country’s history. 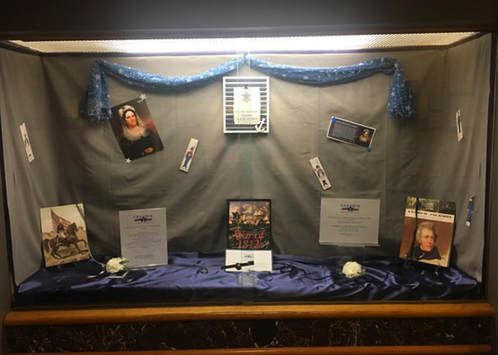 In honor of Rachel Jackson’s birthday, during the month of June, 2018, Rachel Jackson Chapter had a display at the
Huntsville-Madison County Library. 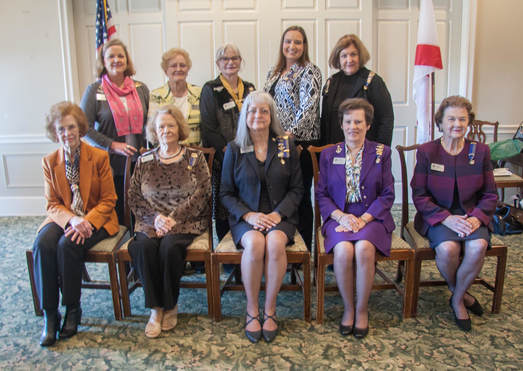 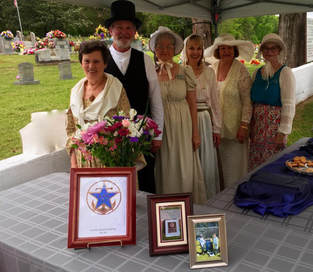 On May 5, 2018, Rachel Jackson Chapter participated with Friendship Baptist Church, Danville, Alabama, in their “Walk Through the Cemetery.”   The event was in celebration of Friendship Baptist Church’s end of four years celebrating their 200 years.  Rachel Jackson also took this opportunity to celebrate Alabama’s upcoming Bicentennial by serving refreshments, handing out Alabama 200 fans, and answering questions from attendees.
​Pictured L to R:  Cheryl Harrison, descendant of War of 1812 patriot Edmond Dutton whose grave was marked by Rachel Jackson Chapter in 2017; George Stone, presenter of several of his ancestors; Wilma Stone; Nettie Elizabeth Stone Lovelady, presenter of several of her ancestors; Martha Ann Whitt, and Brenda Winter. 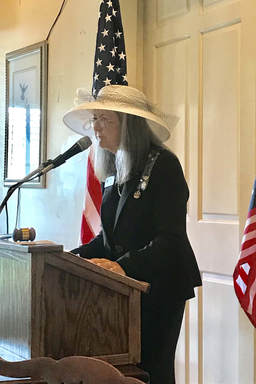 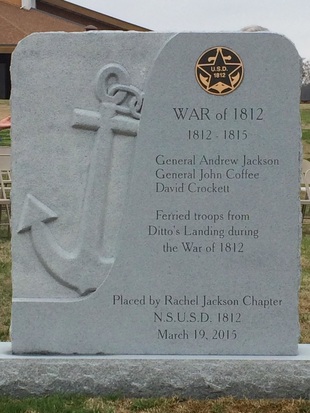 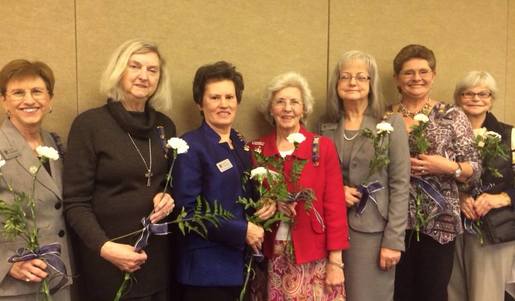 The Rachel Jackson Chapter Chartering of the National Society United States Daughters of 1812 was held on Tuesday, June 15, at 11:30 p.m. at the Huntsville Country Club in Huntsville, AL.
Greeting everyone to Huntsville Country Club was Organizing President Mrs. Carroll Campbell Stricklin, of the Rachel Jackson Chapter. Following opening ritual, a lovely tasty lunch was served to 60 people attending the exciting event. The tables were dressed with bouquets of white carnations, blue delphinium and fern.
Curator National Bettie Gustafson, of Rosemark, presented Mrs. Strickland with a Proclamation Proclaiming Rachel Jackson as an honorary member of the National Society United States Daughters of 1812, national # H003. This special day was held June 15, 2009, at the Hermitage. Gustafson presented this paper to Strickland to go with their charter papers about the life of Rachel Jackson.
Rachel Donelson Jackson was born June 15, 1767, and died Dec. 22, 1828. Rachel Donelson Jackson, beloved wife of Andrew Jackson, was a staunch supporter of her husband’s efforts in the War of 1812.
She traveled to Huntsville with Andrew Jr. to meet General Jackson following the Battle of Horseshoe Bend. Rachel’s personal efforts in keeping their plantations productive during her husband’s absences enabled the family to help equip Tennessee’s militia. Her very presence encouraged extended families throughout Tennessee and the Mississippi Territory to volunteer. The Rachel Jackson Chapter N.S.U.S.D. of 1812 is proud to include descendants of this extended family.
Mrs. Stricklin spoke on the Springfield House north of Natchez, Miss. According to tradition, the home is where Andrew Jackson and Rachel Robards were married in the drawing room August 1791. The home is located near the Natchez Trace, the historic trail between Natchez and Nashville. Springfield was once a 3,100-acre plantation. A 1,000 acres are still under cultivation.
In January of 1977 the house and grounds, about ten acres, were leased to Arthur E. LaSalle of New Orleans, who undertook its restoration and opened Springfield to the public. The mansion is listed in the National Register.
Mrs. Stricklin and another member went to see the site and collected posters of the house, which were favors on the table for all present. While at Springfield, they were given a tour of the house. Springfield is brick and has six white columns across the front, eight windows, two doors and side lights, one door on first floor and a second on the balcony floor.
The house favors the Hermitage. Jackson escorted Rachel to this house to marry her after her abusive marriage to Lewis Robards ended in divorce.
Stricklin had a chapter member show a drawing called “Except for You: The Love Story of Andrew Jackson and Rachel” by artist Jerry McWilliams. This is his latest work depicting their courtship and marriage in 1791 at Springfield Plantation.
Next, the 13+ chapter officers were installed and pictures made of this special day.
Second Vice President National Aline Roberts also attended this event and presented Mrs. Stricklin with an 1812 rhinestone pin to wear to her meetings.
Others attending were Honorary President National, Shelby Dean Ward of Alabama, National News-Letter Editor Mary Collins and Alabama State President, Trustee of the National Headquarters Endowment Fund, Carolyn Drennen and Past Program Exchange Chairman National Martha Stanley.
wcp 7-1-10

This is an official website for the National Society of the United States Daughters of 1812.